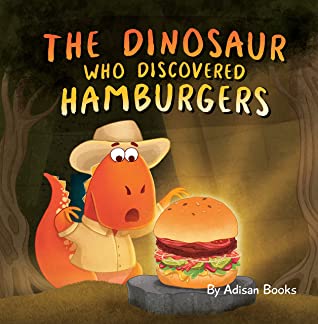 Dinosaurs, hamburgers, and more! Oh my!

Those who have read my blog know how much I love dinosaurs! I am crazy about them. Well, maybe not the feathers, haha. But when I saw this book with THAT cover and THAT title. I had to try it out. It sounded hilarious and right up my alley~

First up, love how the dinosaurs were foodies. Haha, I had totally not expected that one. I was expecting these dinosaurs to just live outside in the wild and have fun adventures and THEN someone discovers a food item that radically changes everything. But instead the dinosaurs love food already and even go to restaurants and fast-food places, and then there is a dinosaur, named Scout, who just feels like something is missing. I don’t know dude, but just chicken nuggets and pizza is good enough for me. I am a simple girl. XD

I loved following Scout on his exciting adventure to find that item that he felt was missing from his life! Indiana Jurassic Jones, here to find the hamburgers from the title. He goes through treacherous jungle, hot desserts, big mountains, and more! Until he comes across a very special forest, and excuse me, did anyone ever figure out how to step into books? Because, even with my stomach a bit upset from the heat, I still want to visit this yummilicious forest. Yum yum. And what he finds next? A bit too easy in my eyes, I mean I would rather have seen him travel just a bit more so it wouldn’t be too easy/obvious, but I was still there for it. I mean pickle flowers? Rivers full of condiments? YAS.

Plus, the story doesn’t end just with him finding several delicious ingredients. Oh no! Now he has to figure it out and I just had so much fun seeing him try all sorts of combos and I wish I could have helped him out! Thankfully, he also has some help and I had fun seeing other dinosaurs as well! And after all was done, I just wanted a bite of that deliciousness. That hamburger is so big and yum. I probably won’t be able to eat for days after that. Haha.

The ending made me smile! I loved how the dish became a hit and how everyone was happy. Loved seeing the commercials and a bit of the movie!

The art was really fun, I loved the style. It was very playful and colourful. And I liked how the dinosaurs were drawn.

All in all, if you love food and dinosaurs then this is the book for you!