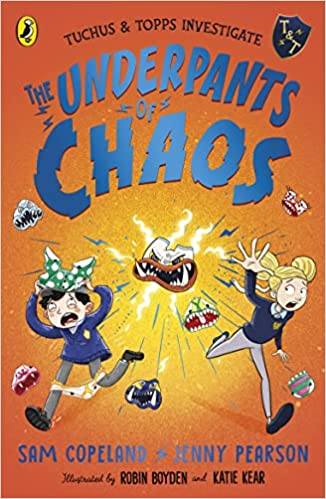 I was absolutely HYPED when I saw that Sam Copeland was writing a new series! I just LOVE LOVE his books, he is one of my auto-buy authors. This book sounded hilarious and fun and I loved that he co-wrote it and that we also got two illustrators instead of one!

In this book we follow two MCs, Lenny a boy who lives with his mom and thinks his dad is a spy because that is a better alternative than what is probably the truth and Agatha who lives with 7 siblings and a mom and dad in a small house. Lenny is the new kid and he arrives at the perfect time! Because something strange is happening at the school. There are SHIVERS happening and with them strange things. Even stranger? The fact that only Agatha, and now Lenny, can remember what happened. Yep, you can imagine that causes some weird looks and some accusations happening. We see our hapless duo try to figure out what is going on and why weird things keep happening. I really loved reading about the SHIVER and seeing what happened. From evil chickens to no gravity. The book made me laugh, gasp, and laugh so so much more.

Agatha was such a fun character! I love how smart she was, but never seemed to rub it in. Or not that much at least, haha. I could imagine that she wasn’t too happy with taking people home given that she has so many siblings and the house is just pure chaos. I loved that she loved books and learning all she could about everything, I think if she was real and we met when I was a kid we would have been friends.

Lenny, oh LORD, how did that boy even get this far in school? I mean, even the AI owls from the library thought he needed a book on his first words… He does show he knows things.. but other times he just is pretty empty up there. He doesn’t know how doors work. Instead of just FINDING toilet paper he uses his sock. He thinks Batman is real. I could go on. He is 9 years old but how he reacted at times I would rather give him 6. XD That boy. I feel for his mom. And I feel for Agatha. Yes, she is fine with being his friend, but at times you can see that she is also wondering how in heavens is she going to get anywhere. Despite Lenny being Lenny, I did like his character and I am happy that we got to see him in his POV, because I am not sure if I would have liked him as much without that. Now I could see closer to what was making him tick, and I saw, next to him being annoyingly oblivious, that he was also a sweet boy who tried his best.

I loved how both of them thought the other was an assistant. Didn’t speak it out loud.. well until the end. Oh Lenny, you shouldn’t have said that.

Later on we also get a new character in the group. Gregor. I won’t tell you more than that, but I did love this character and I do hope that we will see more him in the next books.

I was worried that we would never get to the underpants of Chaos, I wouldn’t have been surprised if it hadn’t happened. Given how Sam Copeland’s previous series had a running gag that the MC would never really change into the being on the cover/title. XD But thankfully, it did happen. It was a short section, but I am happy that it happened. I do hope that Lenny learned something about changing his underwear. XD

I did think it was funny that there were changes/differences between the different illustrations. How the one in Agatha’s POV seemed to follow what the text was saying. For instance in the Lenny POV we see Agatha’s bag twice as a bag with straps. However in the Agatha POV we see a backpack with zipper and that is also what the story tells us. Or how Agatha’s hair is curly and messy (just like what is said in the text) in one of the POVs illustrations and then normal bunches and pretty well lined-up in the other. Plus, there were other situations

The ending was exciting, fun, but I also foresee some trouble on the horizon given that last illustration.

All in all, I had such a big big laugh at this one, it was never boring and I read it in two sessions (sadly dinner came in between). I would highly recommend this one to everyone who needs something silly in their life and doesn’t mind a tad (OK, a lot) of chaos. I cannot wait what is next for Topps and Tuchus.