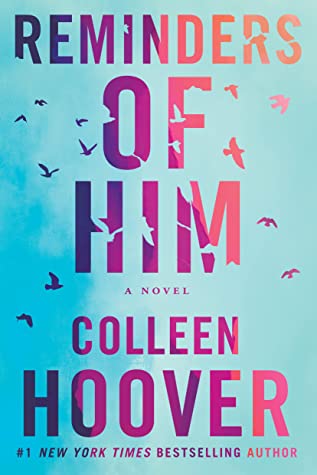 ““Maybe it doesn’t matter whether something is a coincidence or a sign. Maybe the best way to cope with the loss of the people we love is to find them in as many places and things as we possibly can. And in the off chance that the people we lose are still somehow able to hear us, maybe we should never stop talking to them.””

Its been a few years since I last picked up a Colleen Hoover, I used to really read everything (or well 90%) that came out by her each time she had a new book. Since 2013 I was a fan, thanks to a Goodreads friend who told me about the books. But I was just so disappointed in Never Never and Without Merit (2015/2016/2017) that I decided to take a break. But now I am back and I am looking forward to getting back into her books! And I am glad that I started with her newest and BOY it was a book! WOW.

Also note of warning, I did try to write a review but as always with CH books. So many feels.

In this book we follow two characters. Kenna, a girl who used to live in this town. She had a wonderful life with her boyfriend. Until the accident. Now she is back after 5 years in prison and we slowly find out what happened to her and we see her struggle as she tries to meet with her 4-year old daughter. The daughter she had in jail. The one she had to give away. The one she so desperately still wants to see. I just wanted to give her so many hugs throughout this book. See her work through the loss again. Try her best to see her daughter but also keep her distance. See her try to make a living. Try to find her feet again. She was such a fantastic character and I was curious about what had happened in that accident. Was she really guilty? Because so far it didn’t seem that way. I found her brave. I mean, I am not sure if I would have done the same. Start up a whole new life again in the town with so many memories and so many people who don’t like you.

Then there is Ledger, a pretty OK guy though at times I just wanted to shake him a bit. I hated how at times he thought about Kenna, I could understand, I mean, with the whole accident and the death of his best friend, but at times it seemed he understood her. At times it seemed like he really liked her and then BOOM he would hear something somewhere or something would happen and he would just be so angry and mean. Lejerky indeed (thanks to Lady Diana). Thankfully, we do see some very good sides to him. He helps out Kenna. He shows her some pictures of her daughter (he is close to her and has helped raise her which made for some adorable scenes in the book). He hugs her. Seeks her out and makes sure she is fine (though at times he lacks a bit of finesse about it).

But the two sides, that was a wonderful thing. Not two people from the same side, but two people on different sides. And I loved seeing Ledger change his thoughts and judgements slowly as the book goes on.

And I loved the romance. Seeing them get closer. Seeing them reconcile. Seeing them share kisses and moments. See them open up to each other and their lives. As I will say a bit below I sometimes missed the chemistry, but for most it was definitely there.

Extra bonus points to Lady Diana who was just so sweet and made me laugh with her openness. And of course, Diem who was just so cute. Oh, and how could I forget the adorable little kitten named Ivy!

The ending was just so beautiful, I kept crying and crying. I don’t want to spoil too much, but that was so wonderfully written.

And I loved the letters. Loved that we got to read some of them. I wouldn’t mind a whole book with them though. That would be such a fun novella idea!

There were just three things I wasn’t too happy with. One, I mean, I just love the romance between Ledger and Kenna as I said. However, at times I just missed that connection, that chemistry between them. And then there are sex scenes? Normally I don’t mind those, but in this one, most of them I just didn’t find fitting. It just felt odd and not appropriate for the time, for what was going on at the moment. It felt very jarring and more added just because.

The second thing, well, that is not per se an issue with the writing. But that has to do with what we find out about Kenna and the accident. We slowly get bits here and there but we get the big punch in the last part when Ledger gets to read one of the letters she writes/has written to Scotty. In which she tells her events of the accident and GOD my heart just broke in parts. It was already crying for Kenna, but now? Total breakdown. That NO ONE NO ONE really NO ONE cared to help this girl. That they just arrested her from the floor while she was clearly bleeding and in bad shape. That that they didn’t care to check her mental health. And more. I just wanted to punch people. That no one thought to fight for this girl. That everyone just threw her away.

The last thing is that I wasn’t a fan of Scotty’s parents. I get that they have their feelings, they lost their son. But their ideas about Kenna, even before the accident, were horrible. I think that also coloured their thoughts with the accident. But how they reacted to Kenna in the book? GOOD LORD. I get it. You are worried that she may take Diem. I get that you don’t want to make it all confusing for the kid. But seriously, just one meeting? You don’t even have to tell them it is her mom. At least allow her a chance. She deserves that much. Later on they got even worse and I just wanted to yeet something.

But even with those minor points, this book was wonderful, it made me cry, it made me want to scream, it made me squee, it made me hope, it made me root for characters. I am so glad that I am back with Colleen Hoover, I missed these books, her writing style, the powerfulness of it all, the way they always seem to make me cry. I guess I got some books to read and I want to re-read The End of Us as I just found out there is a second book coming out! I would highly recommend this book to all. Bring tissues.