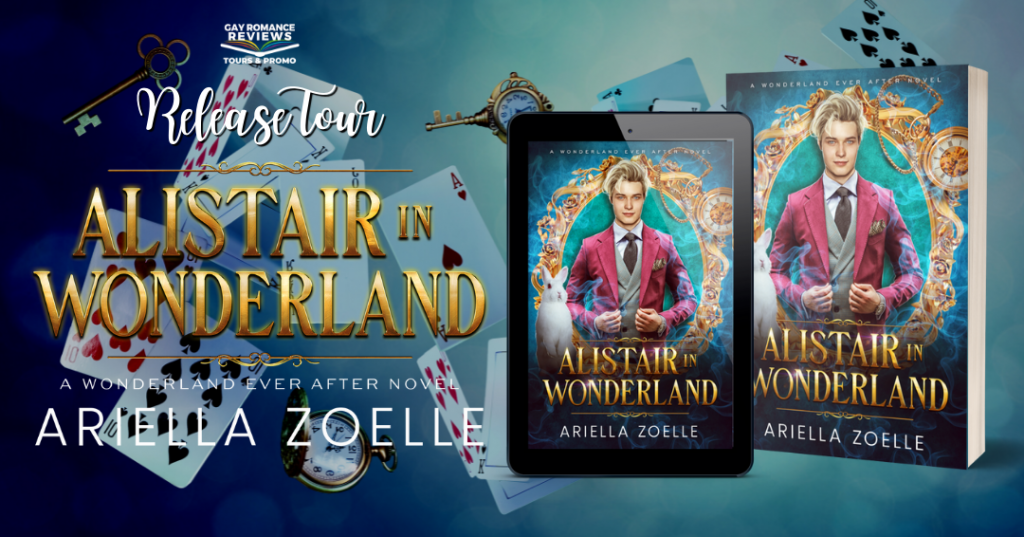 EEP! Welcome to the Blog Tour for the newest Ariella Zoelle book! This time we are going to Wonderland! Say hi to Alistair in Wonderland and BOY I am hyped! I love retellings and this one sounds absolutely awesome. Bring it!

For today’s post I got an excerpt, giveaway, teasers, and book/author information! All the fun~ 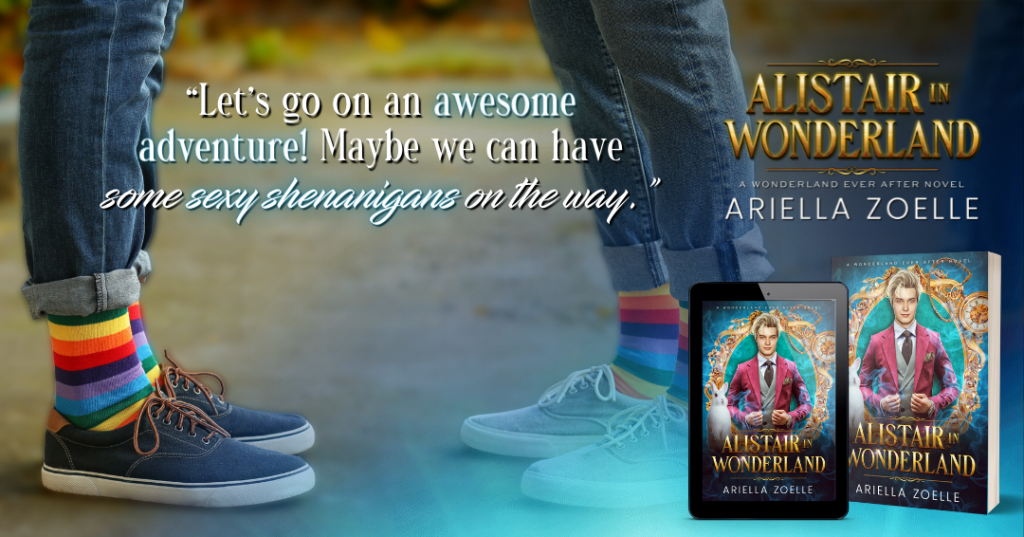 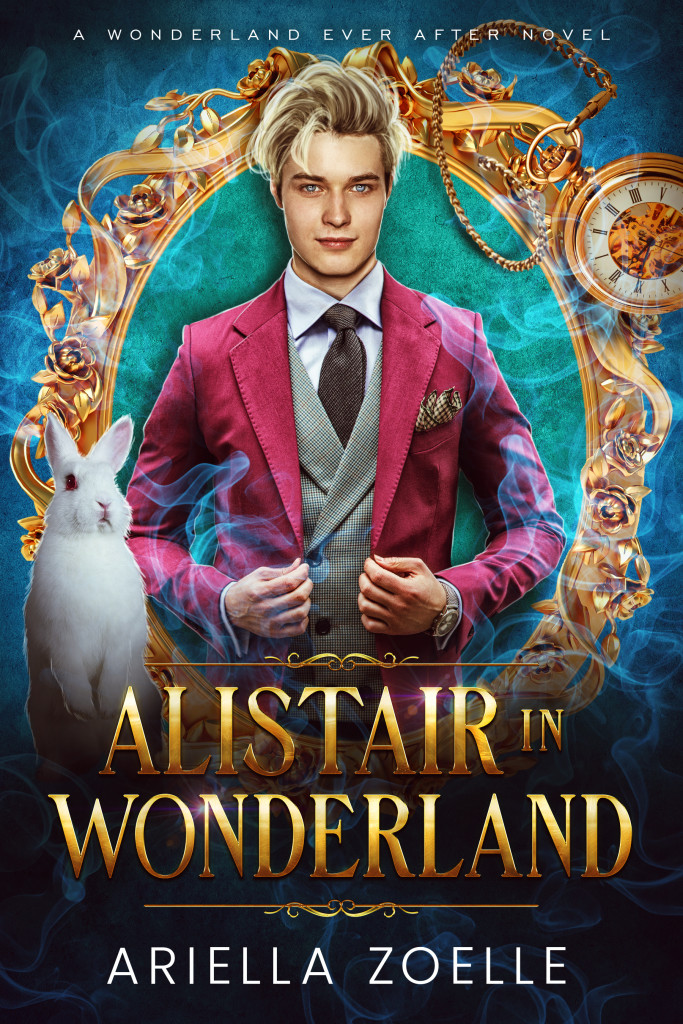 Alistair falls down the rabbit hole and becomes the new Alice. Can he save Wonderland’s magic by falling in love with his fated mate?
My life sucks until Bianco shows up. He’s a gorgeous albino who promises me a fun adventure while looking like a handsome prince from a fairy tale. I happily follow him down the rabbit hole in the hopes of getting up to some sexy shenanigans.
Imagine my shock when I discover he’s the famous White Rabbit from the books and one of the last shifters left in Wonderland! Even more surprising is finding out I’m a descendant of the original Alice, which means I’m the only person who can bring the missing magic back to their world.
That’s all well and good, but our incredible chemistry is highly distracting. It’s impossible to resist our intense attraction when I’m his fated mate, so why bother trying? But maybe there’s a way to have it all.
What if forming a mating bond with Bianco is the way to make all my dreams come true and save Wonderland at the same time?
Alistair in Wonderland is the first book in the Wonderland Ever After series. This sweet-with-heat MM paranormal fantasy romance features affectionate shifters, fated mates, and a magical gay romance. These books have hilarious characters to adore, a lot of sexy fun times, and no angst love stories that make you laugh and swoon. Escape into this Wonderland full of whimsy, where everyone gets a HEA without cliffhangers. Each book can be read as a standalone but is best enjoyed in order. 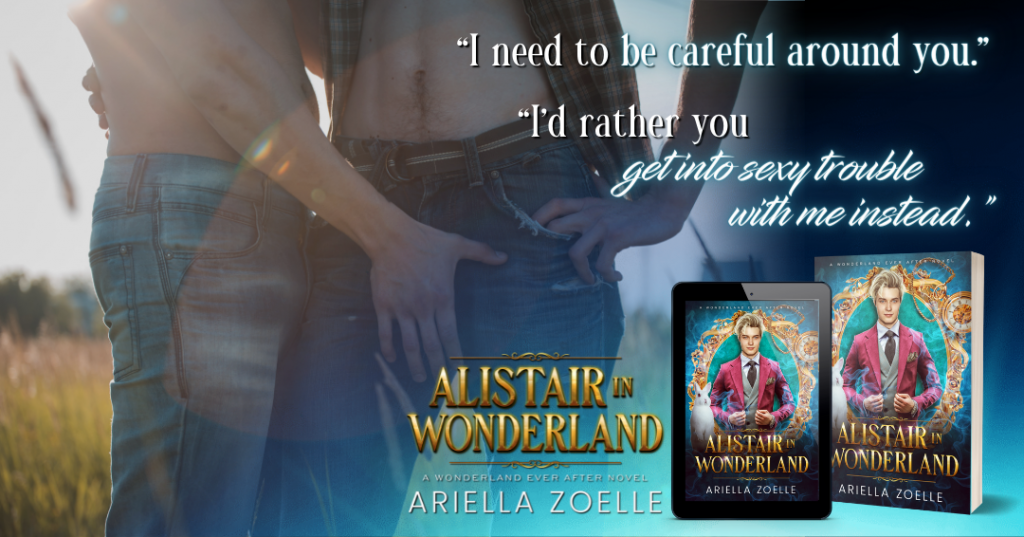 Ariella Zoelle previously published as A.F. Zoelle. She adores steamy, funny, swoony romances where couples are allowed to just be happy. That means she writes low angst stories full of heat, humor, and heart. Her vast knowledge of weird, wild, and wonderful randomness colors her writing, meaning her characters have some pretty strange and entertaining interests.
There are even rumors that she’s a time management wizard who uses her magic powers to create enough free time to turn her massive horde of plot bunnies into sassy M/M romance novels. Her next feat will be turning herself into a full-time author.
For real time updates on her writing progress, please join her Facebook group for exclusive teasers or follow her on Twitter or Instagram. You can also sign up for her newsletter to gain access to bonus chapters, previews of upcoming books, exclusive visual guides, and more.

Chapter 1: Alistair Hargreaves
The sudden feeling of a man pressing close against my back made me stiffen in surprise. His deep voice had my dick’s immediate attention as he murmured in my ear, “You look like you want to run away.” His sexy British accent got me all hot and bothered, which outweighed my outrage at being manhandled by some entitled billionaire looking for a new boy toy.
His cologne was a dark, woodsy scent that stirred desire within me. The romantic in me wanted to breathe him in deep and give myself over to whatever sinful pleasures he wished to bestow upon me. The horny-virgin part of my brain was ready for him to bend me over the nearest table and fuck me in front of everyone until I screamed his name while I came harder than I ever had in my life. I had never experienced such a visceral reaction to a person before. It was a little disorienting.
When I didn’t react, he reached out and wrapped an arm around my waist. He pulled me flush against his firm body as his lips ghosted over the tip of my ear in a way that made me go weak in the knees as my cock grew rock hard.
My gaze darted around the room to make sure everyone was ignoring us. Somehow, the world had gone into slow motion, as if I was a step outside of time, with the man pressed against my back. Satisfied that no one was paying attention, I finally found my voice. “Can you blame me?”
His dark chuckle reverberated through me, filling me with a lustful need to ride his cock until I came all over his stomach. “Not at all. It’s so dreadfully dull here.” I stiffened with a startled noise when he traced the shell of my ear with his tongue, putting me at risk of coming in my pants like a teenager with no self-control. “Shall we entertain ourselves with an adventure somewhere a little more private?”
My cock was desperately interested in what was being offered. I had never done more than kiss a guy before, but if the man was even half as hot as his voice sounded, I’d be down to let him do anything he wanted to me. Hell, if he was only a tenth as sexy as the fantasy version of him in my head, he could buy me with his millions for his personal collection. Screw having morals. At least I’d finally have sex.
Curious about the handsome stranger, I turned to face him. I had been prepared to see a gross ogre of a skeezy rich guy ogling me, but he was the most beautiful man I had ever seen in my life. He appeared to have been born from moonlight, stardust, and dreams come true. Dressed in a white suit with a metallic pink vest and tie, he resembled a prince who had stepped out of the pages of a fairy tale. His hair, eyebrows, and eyelashes were pure white, giving him a striking appearance. He had the most unusual dark pink eyes, which were bright with amusement at my stunned expression. Although they were probably contacts, they looked startlingly real.
The combined effect of his appearance and scent sparked my arousal into a roaring blaze. I didn’t disguise the fact that I was fully erect because when someone was that sexy, he was probably used to it. I swallowed hard as I gazed up at him in awe. “What kind of adventure?”