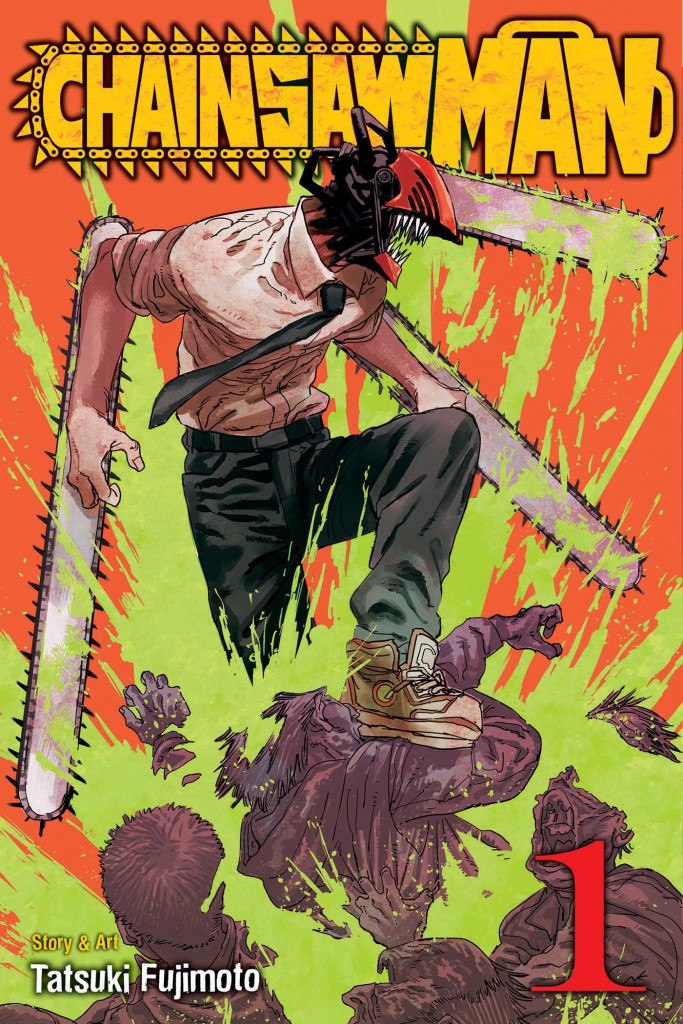 Eep! I could finally pick this one up! And it was awesome! Demons! Devils! Chainsaws!

I have been eyeing this series for a while now and was thinking that I should pick it up before the anime aired. And then suddenly volumes 1,3,4, appeared in my library. Which is freaking magic as they have almost no manga and especially not in English. I do hope that they add the other volumes, but given how the rest of the manga series are treated that were added… I have a bad feeling.

😍 Denji was such a wonderful MC. You just want to root for him. To find happiness. To find a place where he can be happy. Where he can dream. Where he doesn’t have to constantly fight or sell his organs to even have some food or pay off his dead father’s debt. My heart just broke for him in the beginning. He went through so much. Most people would just break down, but Denji keeps on fighting, I guess it helps that he has a little devil pet that loves him and he loves the pet. Later on I loved seeing him feel better. Look better. I loved seeing him kick-ass. Even before all the events of the book he was an awesome fighter. An excellent hunter. But now he is fused with his pet devil (his tail is still sticking out of Denji which is the way to get into Chainsaw mode) he is even more awesome. But, I am happy that he tries to mostly fight on his own, not just because he is unsure about the powers, but also because he knows the effects of it on his body. BTW, I had such a laugh at his fighting men mode. I guess you have to fight dirty if you want to survive the dangers of the street. But dear Denji, I know you love food, but scabs is a no no. And later on, I just wished he focussed a bit less on boobs. It did fit him as a character, but it did get a bit eye-rolly to see him be so obsessed with it.
😍 Pochita! So cute! So adorable! So deadly. XD
😍 Power! I have seen fanart of her online and I already loved her, but now I got to meet her properly. I am not entirely sure how I feel about her. I am very happy to meet her and I love her energy and her carefree attitude, but there were a few moments I wanted to shake her. Yes, she had a few reasons that were totally, or well, kinda, reasonable, but still. I wish she had just asked help instead of going this road. But still, I cannot wait for the next volumes. I love her design and I hope that she learns to be a bit more considerate to others.
😍 Makima. OK, well, I have to say she is a bit hit/miss, but I still love how she took in Denji. Yes, she will kill him if he goes rogue, but she does care for him. Making sure he has food. Make sure he has a job. The dog thing… a bit iffy on that. But hey, if it works it works?
😍 The art, HOLY WOW. That is just awesome. The fights. But also the normal stuff. The demons/devils in all their varieties are all scary and awesomely drawn.
😍 The fights. A bit too gory for me, but I also didn’t mind it that much. It was just so epic.
😍 There is just no moment of rest. There is always something happening. Something funny. Something sad. Something exciting. Something with devils.

🙄 Aki Hayakawa. I believe that was his name. I wasn’t a fan of him. I do hope that he gets on better with Denji, because I seriously wanted to punch this guy a few times in the manga.

All in all though, this one is a kick-ass manga and I cannot wait to read on! I am not sure if I will be writing a review for each volume. But who knows. I would recommend this manga, it is perfect for this Spooktober month!