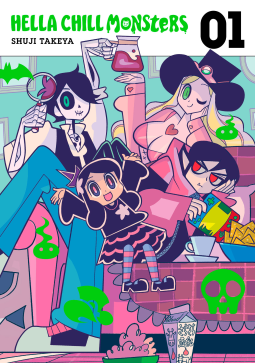 This was even more fun than I had expected! I had hoped for something silly, but this was just so much more silly and fun!

What if you cross Watanuki with Draluc. I could compare some others, but seriously the MC just reminded me of both Watanuki and Draluc because of his love for cooking and baking + being excellent in cleaning, then when he gets roped into for chores he does it both with frustration but also does them with fervour (so Watanuki) along with him constantly falling apart (like Draluc). He was such a fun main character and I just kept hoping for him to get a big case. Something that would really mean he would need to think hard and really go through all the possibilities. Is he getting it in this volume? Well, I don’t want to spoil it. So haha, but I will tell that he did get some fun cases. Including something blocking the pipes in a house. Or that one time when two people got sucked into the sea. I loved how he was both eager to do things (he is so dedicated to become a fantastic super duper detective), but then also had days he just wanted to rest (though he has to be careful about that, because there are two kinds of resting and you definitely don’t want one of them).

As the story goes along with meet many more residents and friends of Bonzo. From Frankenstein Monsters sisters to a sweet girl from the nearby kindergarten (who has a weak spot for Bonzo) to Bonzo’s assistant and grumpy vampire: Vampy (yes, that is indeed his name). It was great fun to see all these characters and I loved how much they cared for Bonzo. I am not sure how I felt about Nero though. I mean, he just was rude. Bonzo was so kind to him and instead of being nice back he just kept shooting stuff, trying to explode him, or other things. Sure, at times he dropped that stuff, but for most of the book I just wasn’t a fan.

This manga was just so silly and weird that I laughed a lot while reading it. Bonzo constantly falling apart was also hilarious. That one time the kids from the kindergarten stole his head. Oh no. XD There is never a dull moment in the manga and you just go from one thing to another and I love love that. I could use some distraction so this was perfect.

The art took me a bit to get used to. The style was just a bit strange. But in the end I can say that I like it and that I think it fits very well with the randomness of the manga.

I definitely would love some more volumes! And I would recommend this one if you want a silly, wacky, strange manga with fantastic (well, except for Nero) characters.