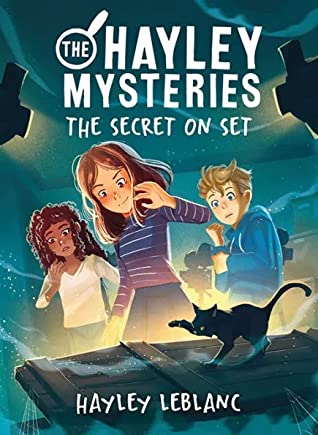 The third book in the Hayley Mysteries series and this time mysterious body sightings, squid stench around a cat, friendship drama, Halloween is coming up in Hayley’s show, costume contest, a new character, and more! Sadly, while I had tons of fun, this one just missed something. Still a good read, but yeah.

Things I liked: costume contest, the mystery in the beginning, what is up with Kara (is she really being clumsy or is something else happening?), Alex who was at first a bit eh but I really warmed up to him and I loved that he was given this chance, seeing Salmon again, the costume contest and what everyone was wearing (loved Hayley and her friends idea), seeing a few scenes from the show, being on the set again with Hayley and the others and see some other stages, the mystery of the movie being made in one of the stages, the treehouse (Does everyone have one in the US? It seems at times to be so.), the cover, the illustrations, reading how Aubrey is doing on the other set.

But the Aubrey dramarama was just so lame. It just made my eyes roll. Hayley is just being her sweet self and you are constantly pissed off against her because of some dumb reason? I mean, if I just discovered something scary the day before, and things are a bit strange on the set, and my best friend wouldn’t be around on the time she supposed to be? Boo, I would be so freaking in anxiety. Just like Hayley. But oh no, according to Aubrey she was angry and jealous… And if she had a valid reason to think these dumb things I would have maybe say OK girl, good. But no. Her reason why? Oh no, I started a new movie and I am so without confidence. And I feel shit. And instead of talking to her friends about it? She just burns her best friend. Wow. Wow. slow claps DANG GIRL. Good luck in the rest of your life if this is how you do shit.

And then there is the mystery which is just freaking cool and great… but then it turns out to be . Like hey, I get it, this is a kids book. But I am reading kids book pretty much on the daily and I have read some AMAZING mystery books. With real mysteries. Real scary things. And I would just like for one time to have Hayley solve a real mystery. Not just mostly fake jewels stolen by a or some . It just feels like it builds up to something and then boom, something boring.

I also really really missed the tv show stuff. Whereas in the previous book we got plenty of scenes, even read along with some, this one barely had any. It was just here a bit, there a bit, maybe a bit of acting, but other than that… nothing.

Also still not a fan of Amelia.

So yeah, I am not sure if this series is for me anymore. I absolutely liked the first book (4.5 stars). Then I read the second book (4 stars). And this one I just cannot give more than 3 stars. It just goes down and down and I am not sticking around. Maybe if Hayley will solve a real mystery for once.