A BIG BIG EXCITED welcome to the Blog Tour for Five Survive by Holly Jackson. OMG OMG I cannot believe that I am part of this tour. So so excited. I really enjoyed Holly Jacksons A Good Girl’s Guide to Murder and I am happy I can promote her newest read featuring a road trip, murder, killer, liars, and more. OHHHH, I want this one! Eight hours. Six friends. Five survive. A road trip turns deadly in this addictive YA thriller from the bestselling author of the worldwide phenomenon A GOOD GIRL’S GUIDE TO MURDER.

Red Kenny is on a road trip for spring break with five friends: Her best friend – the older brother – his perfect girlfriend – a secret crush – a classmate – and a killer.

When their RV breaks down in the middle of nowhere with no cell service, they soon realize this is no accident. They have been trapped by someone out there in the dark, someone who clearly wants one of them dead.

With eight hours until dawn, the six friends must escape, or figure out which of them is the target. But is there a liar among them? Buried secrets will be forced to light and tensions inside the RV will reach deadly levels. Not all of them will survive the night. . . . 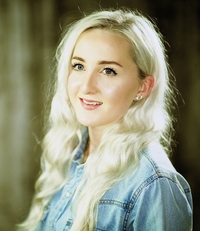 Holly Jackson was born in 1992. She grew up in Buckinghamshire and started writing stories from a young age, completing her first (poor) attempt at a book aged fifteen.

‘A Good Girl’s Guide to Murder’ is a YA Mystery Thriller and her debut novel. She lives in London and aside from reading and writing, she enjoys binge-playing video games and pointing out grammatical errors in street signs.