A magical welcome to the Book Blitz for Designed by Destiny by Maya Tyler! The very first in a new series named: Fairy Godmothers Incorporated! And the book just had such a sweet and shiny cover + a sweet blurb and I had to help out with promoting!!!

Today I got a whole lot of fun things~ You can join a giveaway, read an excerpt, plus read all about the book + author~ 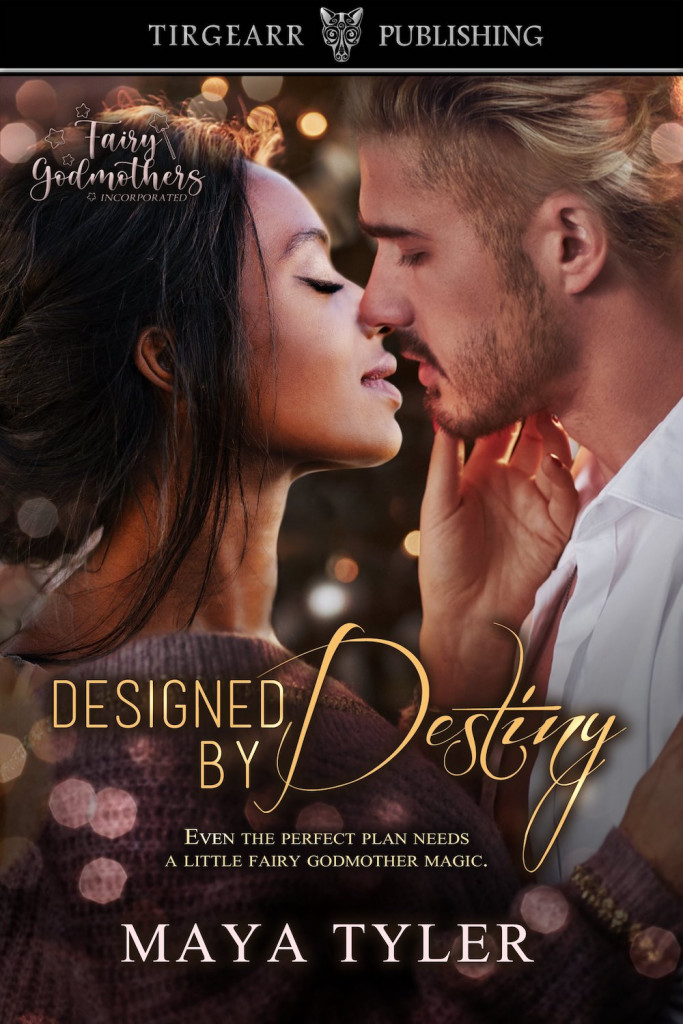 After a painful break-up in university, Bethany Clarke has sworn off love to focus on her career. From her humble South Side beginnings to her position as an architect intern at a prestigious Chicago firm, she’s proven to be a hard worker and is proud of her accomplishments. In three years, she’ll be a fully licensed architect which is more important to her than anything else.

Confirmed bachelor Nicholas Grey is more than the playboy perpetrated by the tabloids. Now his position as CEO of the architecture firm Grey & Company is on the line, and his mother’s interference is making things more difficult. Nick’s serious about his work, but, in order to be taken seriously, he needs to land a huge project. A stable personal life will help guarantee the contract.

Fairy Godmother Faye Delmore hears Nick’s plea and steps in to help. Posing as a publicist, she suggests a strategy to polish his public image, which includes convincing Beth to play his wife. Faye knows Nick needs the huge project to save his job, but she also knows he needs Beth in his life.

What happens when you add a fairy godmother who loves playing matchmaker into the equation? A future designed by destiny. 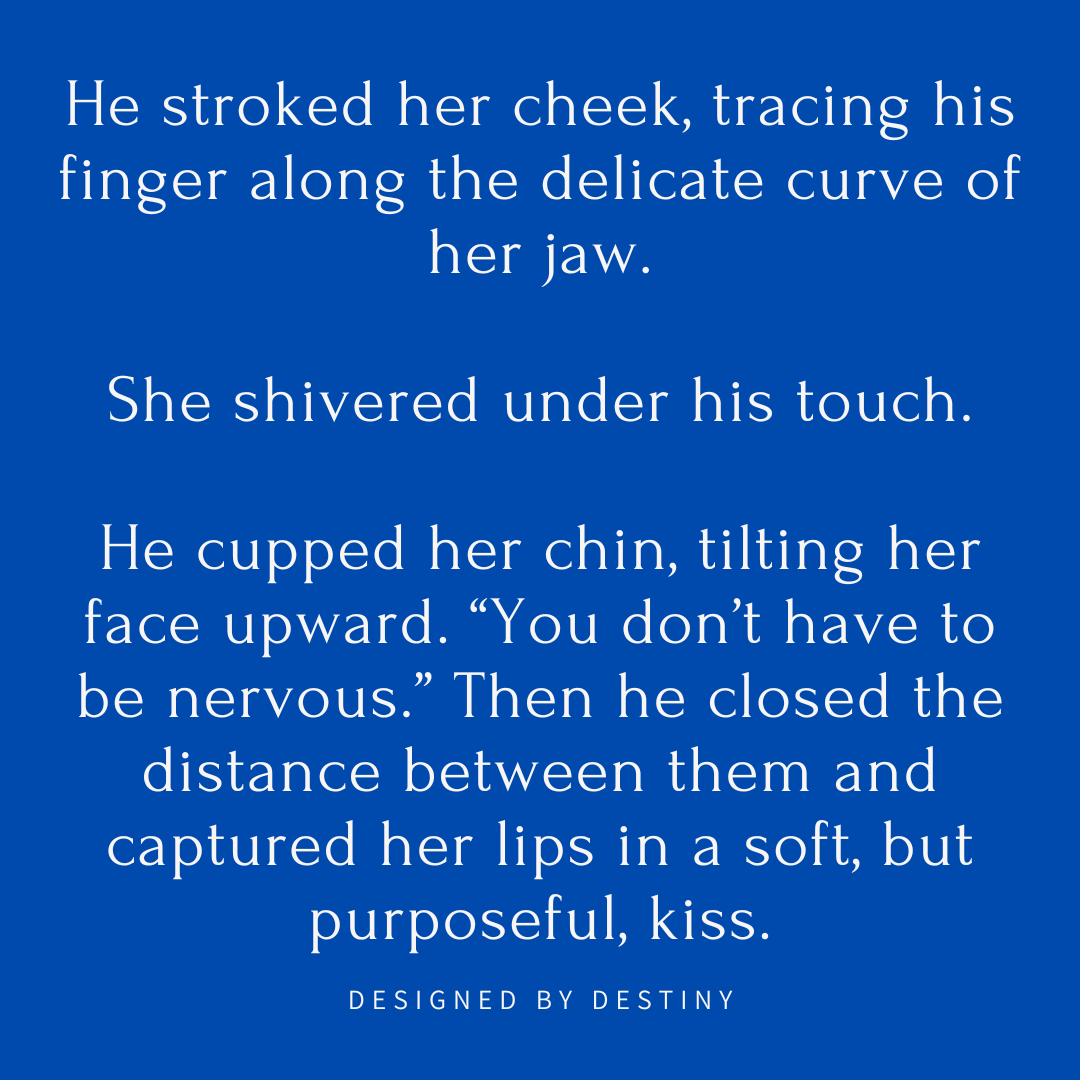 Maya Tyler is a multi-published author of paranormal romance novels and blogger at Maya’s Musings. An avid reader, Maya writes the books she loves to read—romances! Her paranormal romances come with complex plot twists and happily-ever-afters.

When she’s not writing, she enjoys reading, listening to music (alternative rock, especially from the 1990s), practicing yoga, and watching movies and TV.

She wrinkled her eyebrows together. “I really don’t see what that has to do with me—”

“I told him you were my fiancée.”

She laughed. It was utterly unexpected. It was a completely unfiltered, unpretentious, belly laugh. She laughed like it was the funniest thing she’d ever heard. Geez. It wasn’t that funny. If this wasn’t a fake engagement, he might be insulted. He settled onto the couch, reclining against the back cushion as he waited for her to calm down.

“As a heart attack.” Sensing her resolve about to crumble, he pressed his case. “It would be just for the weekend. No one other than Kingsbury would have to know. I can tell him that we’re keeping it under wraps because you’re a very private person. And, since you’re my employee, you didn’t want it to appear like I give you preferential treatment. After an appropriate amount of time had passed, I’d let Kingsbury know the engagement was off. No harm, no foul. And the company would land Kingsbury’s project, one that will greatly benefit our historical renovation department.”

Her eyes briefly lit up at the mention of her department. It was like the icing on the cake. Or a dangling carrot before the cart. He was hungry. With the booking mix up, he’d skipped breakfast. No worries, he’d order in to celebrate their “engagement.” He could see her undisguised interest… in the historical renovation project, at least. He pretended that didn’t wound his ego.

“I’d ensure you were assigned this project.”

She chuckled. “So much for not giving me preferential treatment.”

Sitting up straighter, he felt the faint stirrings of hope. “Does that mean—”

She shook her head. “This isn’t a negotiation, Mr. Grey.”

“Nick.” He offered her a charming smile. “I find, in business, everything’s a negotiation.”

“Not to me. I’m pretty uncomfortable with deception.”

“Honesty is an admirable trait. I value honesty.”

“Except when it comes to creating a fake fiancée?”

“You got me.” He ducked his head, grasping for the right words. This negotiation was a dismal failure. He had to hand it to her. His Bethany had integrity. That also ruled out straight-up bribery. What did she want? “What is your five-year plan?”

She looked startled, like she’d been anticipating a continuation of their sparring match. He held back a smile, throwing her off-kilter was surprisingly satisfying.

“After I finish my internship, I’d like to become a project manager.”

“That’s ambitious for an entry-level intern. This is your first year, isn’t it?”

“A commendable trait. And one I share with you.” He hoped he looked sufficiently earnest. “The success of the company is important to me. Expanding into historical restoration has been a long time dream of mine. With the Kingsbury contract, we have a huge opportunity.” He looked away, pacing the execution of his grand finale. “I allocated significant resources on this expansion. If we miss out on this contract, Grey & Company might not be around to get another chance.”

Alluding to their dire financial position was a slight exaggeration, but he was desperate enough to play on her sympathies. She would respect his ambition—he hoped. He glanced up when she didn’t respond immediately.

She bit her lip, looking deep in thought. “You don’t know anything about me.” She spoke softly, like she was talking to herself.

He felt like an interloper, but he was too close to let a little guilt get in the way. “The company would’ve completed an in depth background check before extending an employment offer.”

She cast an exasperated look in his direction. “Which just means I’m not a criminal. We know nothing about each other. Certainly not enough to pretend to be engaged, even for a weekend. Your scheme—no offense—is crazy.”

“But you’re amenable to helping me.”

Her tone was clearly dismissive, which meant the window of opportunity was closing fast. He leaned forward, grasping her hands within his. “You can help me. And I feel like you’re the only one who can.”