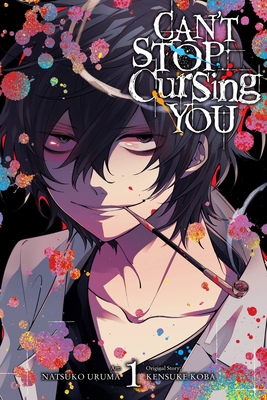 And so our first arc ends! Someone who may seem x… but isn’t that much of that at all. A mysterious teacher whose actual job is a curse breaker. Death and murder. And tons of dialogue.

I recently read a review about this manga and was just waiting for this month to appear so I would be able to read it. OK, by the time the review goes up it will be November. XD

When something is amiss in a high school it is up to Cursebreaker Saeyama to infiltrate the school and figure out things before it all goes too far. There is someone who made a contract with a curse god. People are going to die. It was quite an interesting case and I loved that we got to see both sides. The good ones. The bad one(s). We see how the good side tries to figure things out before everyone is dead (with normal and some special ways) and how the bad side is going further and further into a spiral of craziness. The curses were freaking NOPE. Get called? Near people? Bye! Enjoy being murdered in a freaking gore way.

So instead of the Death Note (for which you need to know someone’s real name) in this case you need to know someone’s phone number. That is a pretty interesting one. Though way easier to get than a name. In these times at least. Still a fun requirement. Plus, there are other things that made things quite interesting. Like that someone has to see the caller get called. That the call is noticed. Either by crowds or a third party who looks at the cursed phone. The fact that you can ignore the phone call if you don’t react… however there are also other requirements for that. So yeah, that made things scary and tricky.

I am very curious about curse gods, but also about the curse breakers. Maybe some backstory on either of them would be fantastic and I hope that the next volume (yes, I will keep reading) will give us more hints to that. And also more about Saeyama, because he acts all aloof but we see that he is cunning and shrewd. What kind of cases did he have before this one? Who is the person calling him? How long have these curses been around? I mean, this one took cellphones to start the curse, but is there also other ways?

However it was a bit dialogue heavy. I get that there is a ton to be said and solved, but at times I just found myself tuning out a bit. Like, yeah, I get it. Especially the prince just had way too much dialogue and most of it was just utter BS. I mean, all grand things, and some psychotic stuff. Yes, he did make a good villain. That is 100% true. But I wish I could have tuned him out. XD

The art was pretty fab. I especially loved the facial expressions of the characters. Either normal or when they are going in madness mode as I would call it. The gore parts are also well-drawn, not too much, but also not too little. I mean, there is still plenty to see.

The ending of this arc? I enjoyed it, but I was surprised at how dumb Mikki was in the end. I guess that is a typical villain for you. Thinking they got it all covered… And then we cut to another scene that made me VERY CURIOUS and also NOPING the hell out. Haha. I don’t want to say anything, but I am definitely curious on the rest of the series now. And I guess that Saeyama is now permanent teacher? I would think now the case is over that he can go back to doing whatever he did before, but maybe he likes teaching? I don’t know. XD

All in all, this was one heck of a ride and I am glad I found out about this manga. Gore, scary, curses, mystery, and more!