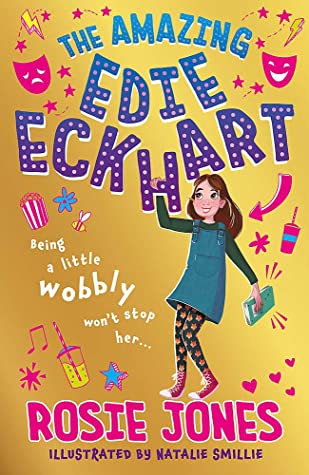 A wonderful book about a girl named Edie who has cerebral palsy.

Edie was a wonderful character but I have to say that I liked her in the end more than in the beginning. There is quite a simple reason for that. In the beginning Edie was a nice girl and a great MC, but she kept using her CP to get out of things (The Card), or expected people to do everything for her because of that. While she is very much able to do things herself. When someone told her no she just would get huffy. And there were some other things that just had me shaking my head. But as the story continued I started seeing a new Edie. One I definitely liked more than the one in the beginning. I saw an Edie who discovered that she can do things. That she can be independent. That her CP doesn’t always work with things, but that there is plenty that she can do. She doesn’t need someone to bring her tights or clean her mouth if she dribbles. It was also great that there were also key characters who told her this, who talked to her. She really grows a lot in that aspect and it was just beautiful. I loved that she discovered that not only is she a great writer, but also a great actor. I loved seeing her embrace her role in the musical and see her try to get through the lines (so many of those). I loved seeing her add a little bit of her own in the character she is playing.

Flora? OH man, I was just shipping Edie and her from the beginning. Yes, I am sorry. I am so so sorry, but I just couldn’t resist. I mean it was clear that Flora was interested in more than being a friend to Edie… now it was up to Edie to figure that one out. And that took a bit long. Haha. Edie was a bit too focussed on getting a boy to consider another option, then again given how Edie reacted when her teacher told Edie about her wife… I am guessing either the parents don’t care too much or Edie doesn’t go out that much. I mean, hello 2022. I do think that I would have liked Flora to be a bit more honest. At points she acted a bit like Oscar. I get it, you like Edie, but you can also see that this girl doesn’t understand that there is more than one kind of love, instead of being grumpy or jealous, just give her some more bigger hints. XD

We also meet some other girls, Georgia was eventually pretty nice but dang that girl needs to understand that there are some things you shouldn’t say. XD Poppy was such a sweetheart.

And most peeps know how I often feel about little brothers or sisters? Well, I have to say that Louie was just adorable and sweet. I loved how he was with Edie and how Edie was with him.

I just have a weak spot for diary-written-books. This one is no different. I just loved reading this dairy and I had a laugh at the beginning, because in the beginning of the diary Edie was not a fan. But her mom promised her some money if she would keep on writing because mom thought it would be good for Edie to get her thoughts on paper. But as the story goes on we see that Edie gets more invested in the diary and takes it with her everywhere. I loved that!

Oscar? Sorry boy, but I wasn’t a fan. In the beginning he seemed like a wonderful friend. Being there for Edie. Helping her out. But then school started and we saw that he was quick to find a new club, new friends, even a girlfriend… but if Edie dared to even have something of her own he would get huffy and angry. She found new friends and he was jealous. She was looking for a boy and he was jealous. She found a new love (theatre) and he was jealous. She didn’t need him for every bit, jealous. Heavens forbid that she tried doing things on her own or growing. He was just so toxic. It was all fine and fun if he got all the things, but Edie had to be Edie from the beginning or else. Later on we do see why, but seriously? I just wanted to shake him around. He was just so rude and horrible. I felt for Edie.

I loved the various illustrations dotted throughout the book! Their style was just so so much!

All in all, a very fun book featuring great characters and a lot of character growth, I love that we get CP representation (we need more of that), and I love the format. I will definitely be checking out Edie’s next book which features the next term. I cannot wait to see what is next for her.