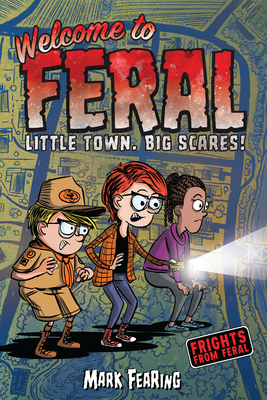 While writing this one it is mid-October and I was hunting around for some more Halloween books to read! I came across this one and was instantly curious! This sounded just like too much fun. A mysterious town. Spooky tales! Sign me up!

In this book we meet with up with Freya who has 5 mysterious stories to tell us about the town of Feral. Where spooooooky things happen. And she is keeping track of it. Yep. Just like Dipper and his great-uncle did from Gravity Falls. Which made me squee in happiness. I absolutely LOVE Gravity Falls and this just gave me so much vibes!

First story was a 4 stars for me. It is about a playground. Two boys are visiting just when the dark sets in. At first just to play and tease each other (or well, the lanky guy does most of it), but then things get spooky when they decide to go go to the slide. Now I hear you say, but girl? What is scary about a slide? Well, you will have to read it, but I was already noping before the kids got into that thing. XD It was a great story and a great start.

The second story was a 4.5 stars for me! This time we are going into a place named the Forgotten Forest, which already screams OMINOUS (in that voice) to me, but then we hear Freya dish up some other things and I was like, OHH, we are going for this one! Plus, it has a spooky ice cream truck? Come on! This story was absolutely creepy and scary (with a dash of gruesome) and dang these kids should have listened to their friend. I mean, boo, if you find an ice cream truck in the middle of a forest? Plus, you just found some bones? RUN RUN RUN!

The third story was a 3.5 stars for me. This time we are going to the middle school! Detention! Spooky things! This one was pretty fun. I love that it takes place in a dark, abandoned (or seemingly so) basement and that there is even a creepy janitor and an even creepier teacher! While I didn’t know the MC of this story that well, I was hoping she would get out alive. It definitely ended with a surprise. It was both awesome and sad seeing all those different times (I just cannot think of a word, my English is leaving me) presented. That is all I will say.

The fourth story was a 4 stars for me. I love this quote from Freya that made me very curious about the story we were about to get: “Every kid in Feral rides a bike down Big hill but not every kid does it twice.” OK. Let’s go! A kid totally invested in space and constellations finds a dirty bike next to the road. Given the nature of the stories before this one I was just like NOPPPPPEEE don’t do it! Don’t do it kid! Just keep on playing spaceman and such. I did like the name of the bike though. Very spooky coincidence. I wasn’t a fan of Crane’s dad. I think if Crane’s dad was a bit more kind towards his family maybe things wouldn’t have escalated. The ending was typical for the book, oh no, by no means do I mean that as bad. Definitely not. I am loving these endings. Some are unexpected, some are expected. All of them are great.

The last story gets a 4.5 stars from me. This time we are following a troupe of scouts as they go camping. Man, that troupe leader just gave me the heebiejeebies. That tent of his was cool though. XD One of the kids sees the scout leader doing something spooky and abnormal and so begins the suspicions of the troupe and we see them try to figure out what is going on with their troupe leader. I loved how they were preparing for anything. From running to wood carving (and not something cute, oh no, something pointy). It was great fun and I was very curious to that last night of the camp. What would happen! But did I expect what happened at the end? HECK NO! I was super surprised and all giddy! This was a twist! This was good!

The ending to it all? Now I want the sequel even more! I mean, I was already hyped for more of Feral after the first story, but now with that ending? I need to know! Give me the next book!

I am giving bonus points for adding a map! I just LOVE it when a book adds a map to the book. It just gives the book something extra, plus, I love that next to the standard things like here is a school or here is a bridge there were little bits here and there that had things on it that said: “The mosquito monster” or “Gnomes Sighted”. I also like that we had 3 types of notes. The white ones seemed to be spooky buildings/spooky sights. Then there is blue which is the normal stuff. And lastly we yellow oval/circles that list monsters and spooky creatures. It was just oodles of fun and I absolutely poured over the map. Soaking it all up and wondering which stories we would get!

The artwork was a bit odd at times, not in a bad way, it was just a bit rough. But as the stories continued I started to like it. And thought it fit well with the weirdness of the stories.

All in all, HECK, this was just tons of fun and I flew through this one. Highly recommended!