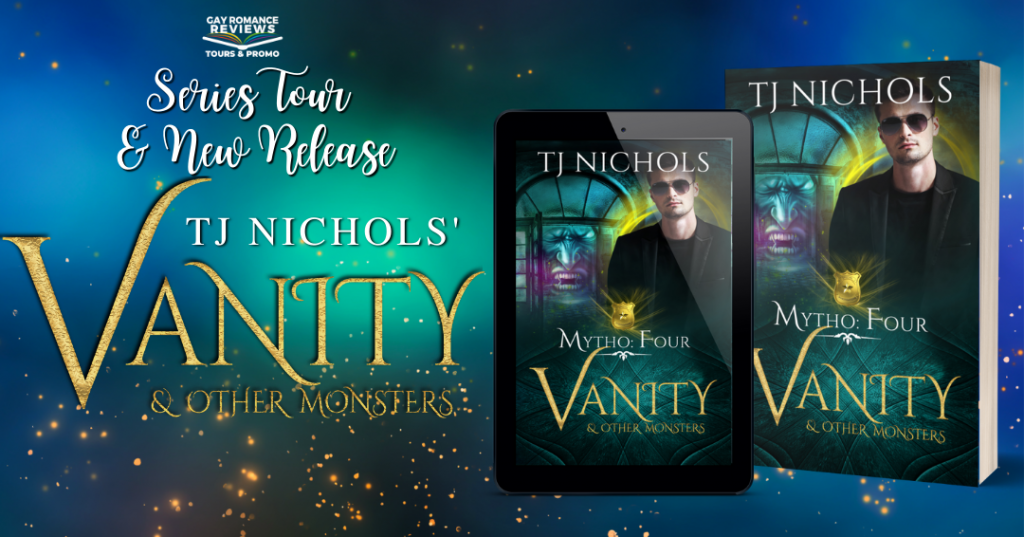 A mystical welcome to the Blog Tour for Vanity and Other Monsters (& The Mythos Series) by TJ Nichols! This is originally an Instagram Tour but I requested a Blog tour as I just know that this one is getting way more love here than on my Insta. The book just sounds so much fun and I want to share it with everyone~

For today’s post I got an excerpt, teasers, a giveaway, and book/author information! I just love Gay Romance Reviews Tours because they always deliver a ton of fun stuff to share~ 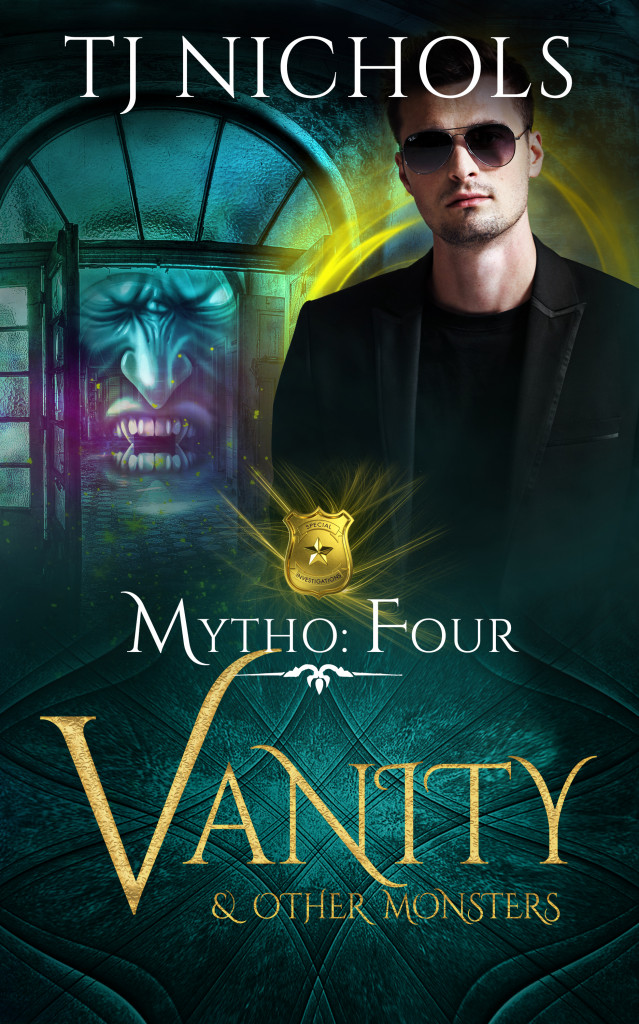 All the lines of fate have been pulling Edra Tendric to LA. It is the last place he wants to go, leaving his mate Inspector Jordan Kells in San Francisco to deal with a fractured mytho population and an increasingly tense political situation. Someone wanted Edra removed as Mytho Liaison, and they got their way.
With the exposure of their relationship, Jordan has to negotiate the fallout at work and among the people he called friends. As the elves arm themselves and favors are called in, Jordan will need to decide where he stands because doing the right thing doesn’t always mean following the law he swore to uphold.
Being a lesser dragon’s mate isn’t all mating flights and fun. Not when his mate is the Knight of a city on the brink of war.
Book 4 in the gay urban fantasy crime series that follows Jordan and Edra as they solve crime and figure out how to improve mytho and human relations. 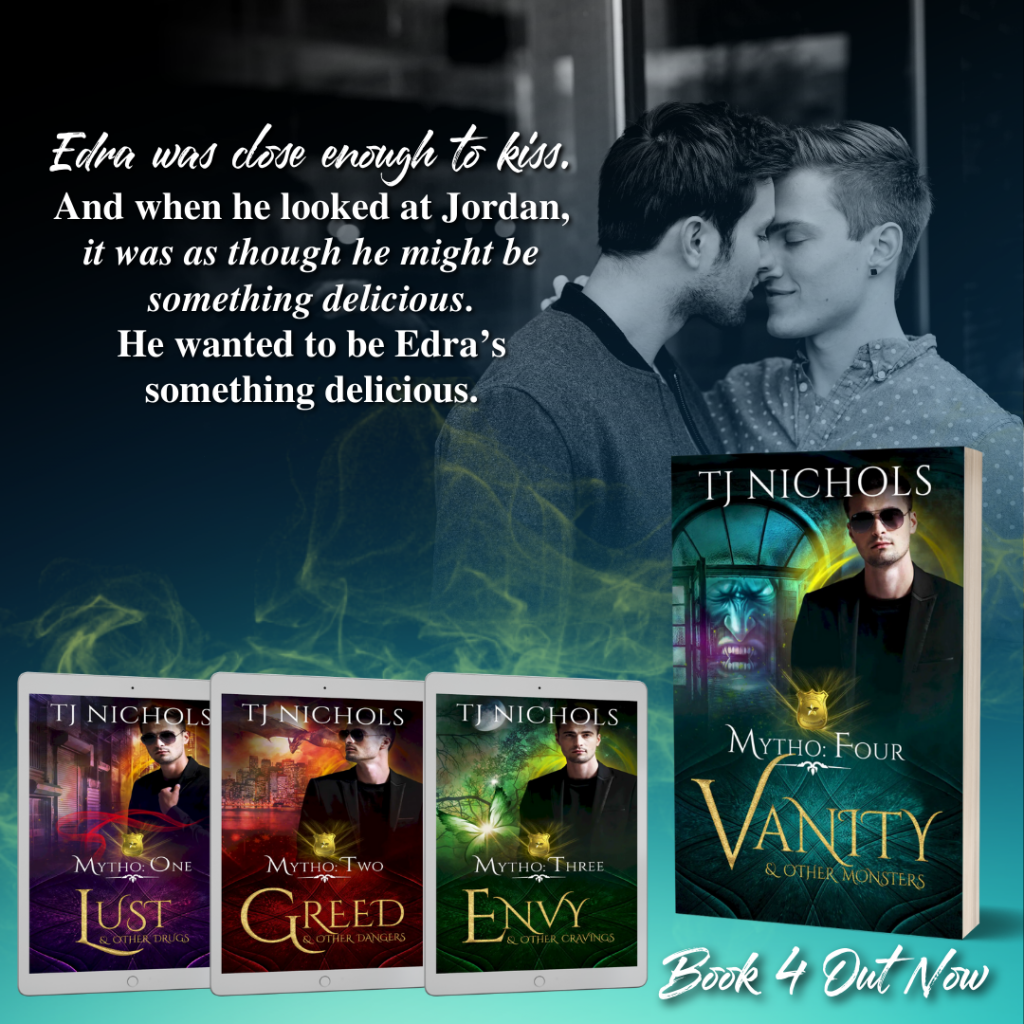 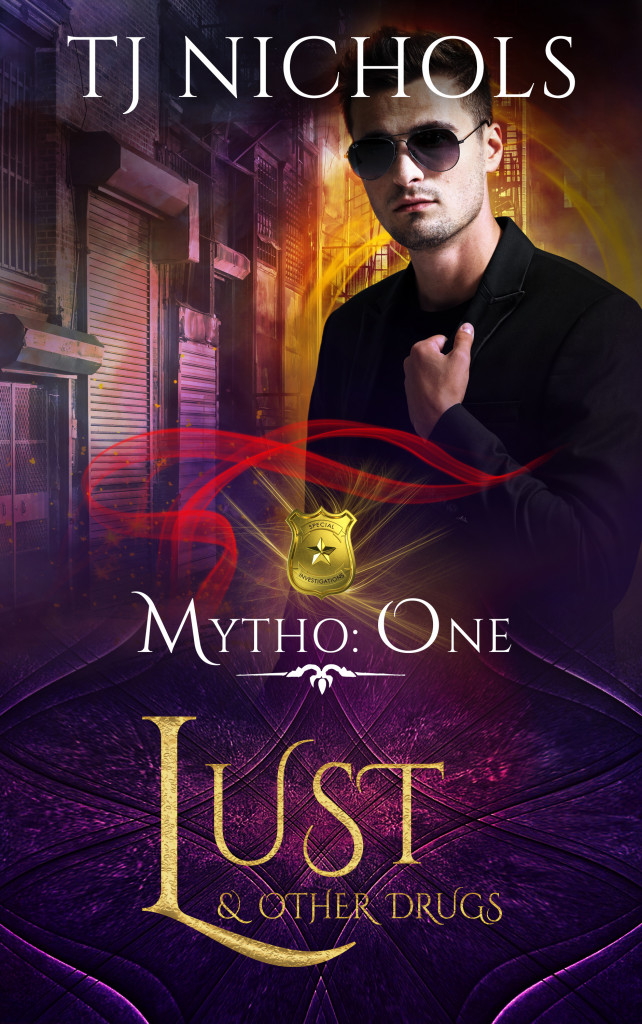 “Nichols has created something really fascinating here and I am very eager to continue on with the series.”—Joyfully Jay
Police officer Jordan and dragon shifter Edra might have to work together, but they don’t trust each other—even if sparks do fly between them.
If anyone finds out Jordan’s a mytho sympathizer, it could kill his career. No one can know that he frequents the satyr dens and uses the drug Bliss. A dead satyr might not get much attention, but two dead humans who appeared to overdose on Bliss? That shouldn’t even be possible.
And it might not be an accident.
Edra, the Mythological Services Liaison, has been covering up mytho crimes to protect the community’s reputation. With a mayoral election looming, the last thing his people need is a scandal.
To get a murderer off the streets, Jordan and Edra will be spending a lot of time together, and it won’t be easy to keep up with their deceptions… or to keep resisting each other.
~~~
Lust and other Drugs is the mm urban fantasy romance you’ve been waiting for; rich with creative and engaging world building, complicated characters, and an exploration of the intricacies of dragon mating rituals, Nichols gives a captivating and sensual touch to gay paranormal romance.
Book 1 in the gay urban fantasy series that follows Jordan and Edra as they solve crime and figure out how to improve Mytho and human relations. For readers who like dragon shifters and forbidden romance. 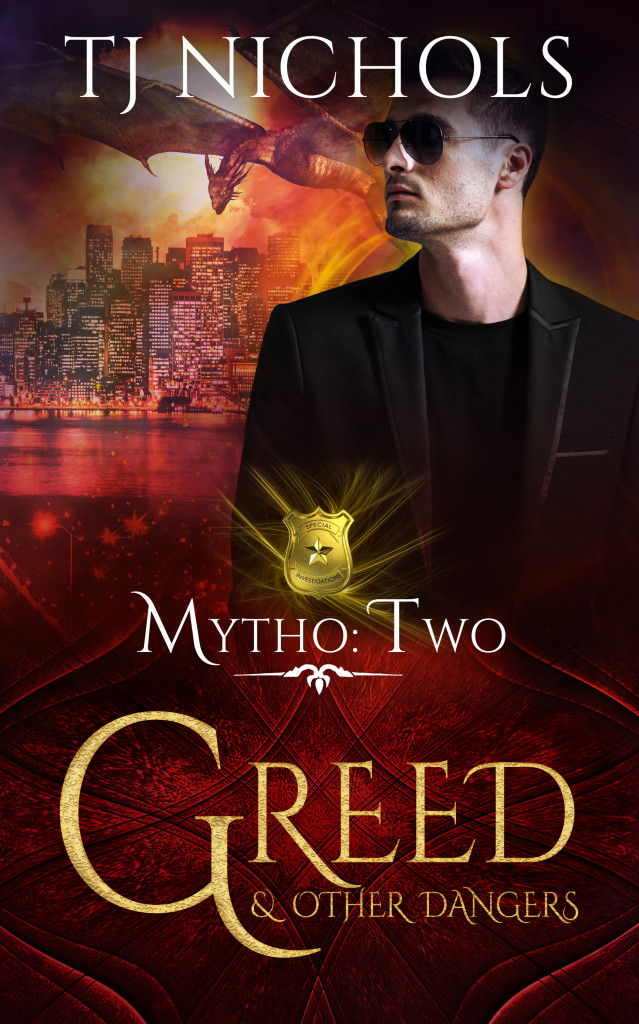 Dragon shifter Edra has always lived to serve and protect—in ages past as a knight, and in the modern world as a mytho liaison to the San Francisco PD. Behind the scenes he safeguards the mythos community from scandal—and further human hatred. When the eggs of a rare greater dragon are stolen, Edra must find and return them before the mother razes the city.
Edra’s partner, Jordan, has just been promoted, and he’s on the trail of several stolen mythos artifacts. Together, they track the eggs to a colony of mermaids living in the bay near Alcatraz Island.
But trying to separate a mermaid from her treasure is asking for trouble.
As Edra and Jordan grow closer, they test the bounds of human-mythos relationships. But Jordan isn’t ready to mate for life, and Edra won’t pretend to be human for Jordan’s friends. With the hills on fire and a storm brewing in the bay—and in their bed—something’s got to give.
Book 2 in the gay urban fantasy romance series that follows Jordan and Edra as they solve crime and figure out how to improve mytho and human relations. For readers who like dragon shifters and forbidden romance. 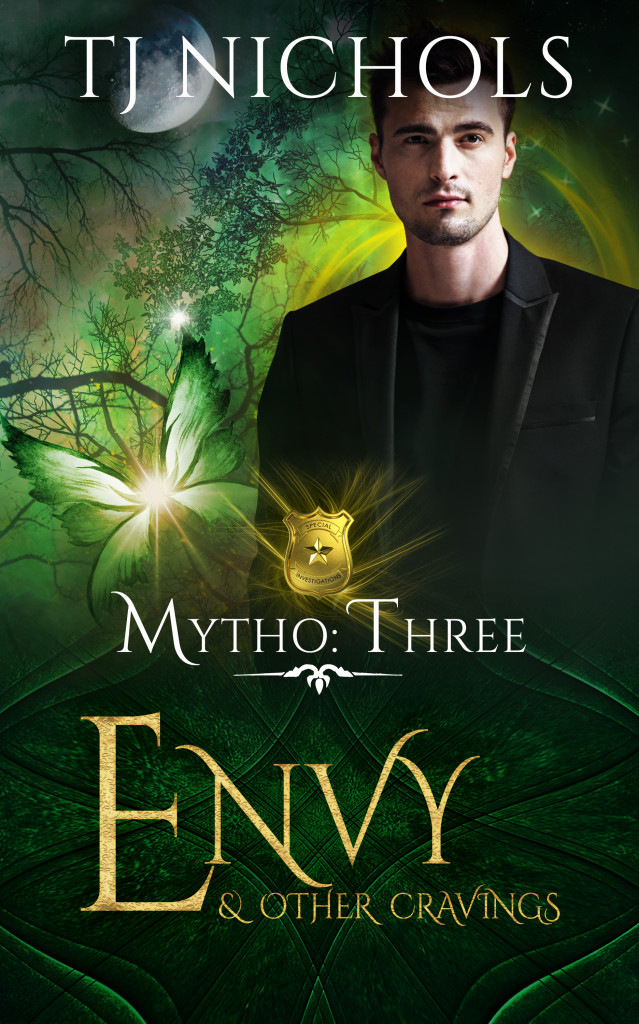 Having given into desire and cemented their mating bond, Jordan and Edra are under pressure to keep their relationship a secret. Jordan fears his career will be over if it is discovered the that he is sleeping with the Mytho Liaison Officer.
For Edra, there is no hiding his relationship as the werewolves can smell Jordan on his skin. He finds himself being shunned by some of the Mytho community because they view him as a traitor for bonding with a human.
When a grove of nymphs is attacked and one is brutally killed, Edra and Jordan will need to use every skill they have to prevent more bloodshed. To Edra, that means covering up evidence, and this time, Jordan agrees.
As secrets are exposed and old bribes surface, Edra and Jordan face the reality of what being mates means.
Book 3 in the gay urban fantasy series that follows Jordan and Edra as they solve crime and figure out how to improve Mytho and human relations. For readers who like dragon shifters and forbidden romance. 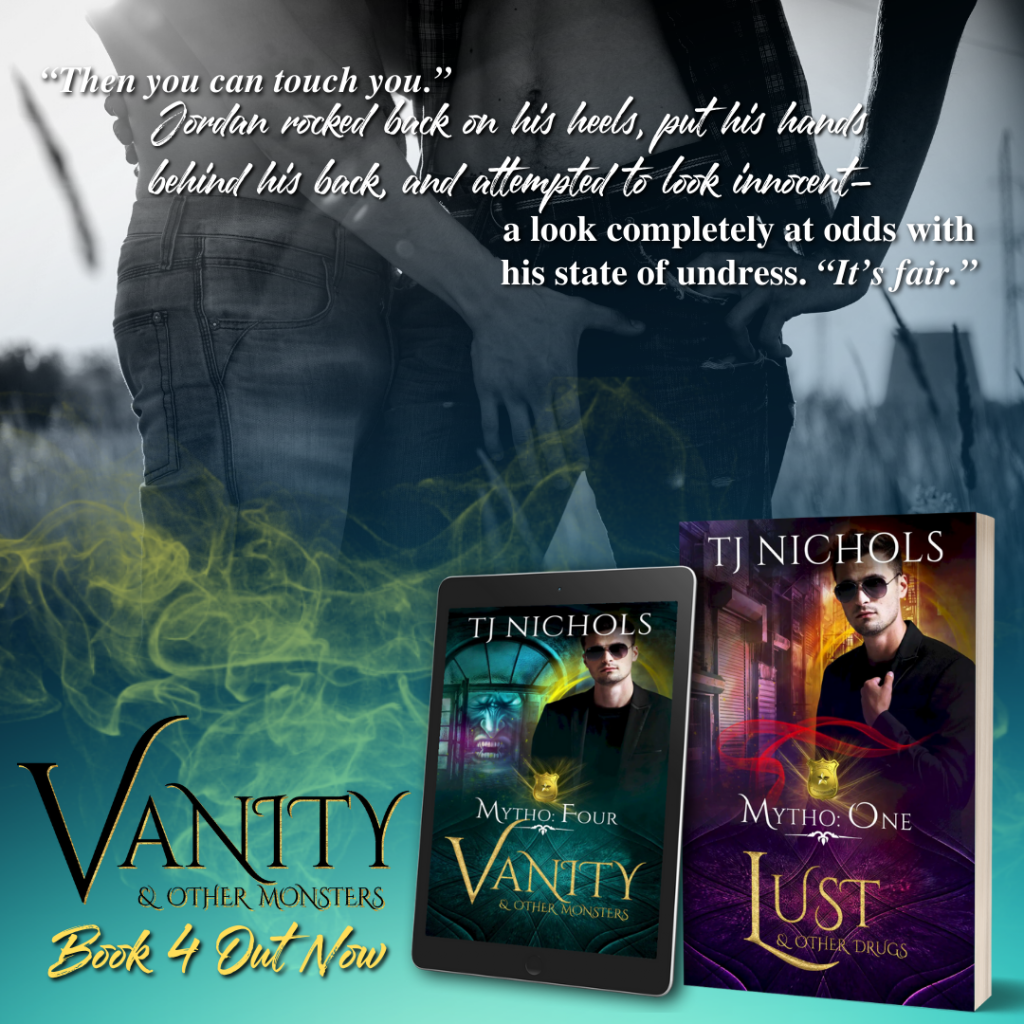 TJ Nichols is an avid runner and martial arts enthusiast who first started writing as child. Having grown up reading thrillers and fantasy novels, it’s no surprise that mixing danger and magic comes so easily, writing urban fantasy allows TJ to bring magic to the every day. After traveling all over the world and Australia, TJ now lives in Perth, Western Australia. 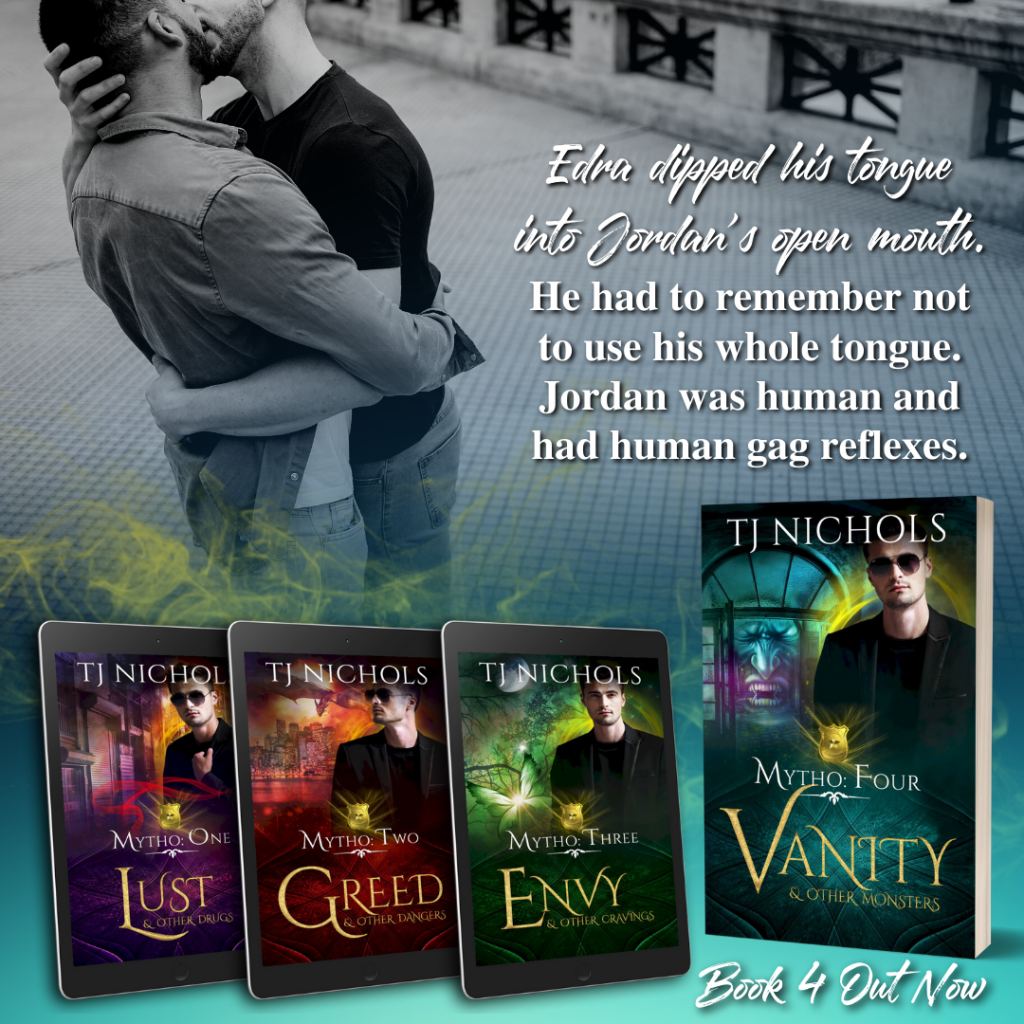